NOTICE: My articles are NOT grammatically correct. I am a college graduate and understand all the rules of proper writing. I do use CAPITAL LETTERS to stress and emphasize important points. I do this to enhance your UNDERSTANDING. To me, understanding is far more important than proper writing skills.

There are 196 independent countries in this world. Can you name them? Neither can I. There are those who in Americans do not  hold to a “WORLD VIEW.” How many continents are there in the world?  Most 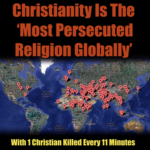 American’s cannot even name 20 of the 50 states in America. I will attempt to discuss why this is important and what our problem is. I believe Americans have become complacent and satisfied in their own little world. Their world consists mainly of their city, state, home, family, job, surroundings, and culture. Americans have become “satisfied” with only what affects them. People do what they want to do, and people do what is important to them.

Is it possible to have a worldview without being a Christian or believing the Bible? ABSOLUTELY! A person’s worldview represents his most fundamental beliefs and society and his culture influence their belief system. A Christian worldview should be a comprehensive view of the world from a biblical standpoint. BUT, there can also be a big difference between a Christian worldview and a Biblical worldview.

As one neighbor told me (concerning HIS worldview) “The rest of the world does not affect or concern me. It is way over there and I am over here.” In other words, it is of no concern to him. It is funny how people never look at the world or world events unless America happens to be in a war, or unless all 6 major news networks focus on it. The normal American does not spend time researching what is wrong in this world. All that is reported today is the hot political topic, this award show, Hollywood stars, or sports. I think this is funny considering one is named “WORLD NEWS TONIGHT” while little of the world’s events are ever reported. You even see the same thing happening on social media. Ask someone, “WHO IS CHANGING THE WORLD?” And they have no idea, yet they will agree the world is changing and has changed.

WHY IS A WORLD VIEW NECESSARY

Without a world view you will never see or understand the “COMPLETE BIG PICTURE.” I am going to look at a “CHRISTIAN, BIBLICAL AND PROPHETIC WORLD VIEW.” Before Jesus ascension back to heaven He commanded his disciples, Matthew 28:19-20 “Go ye therefore, and teach all nations, baptizing them in the name of the Father, and of the Son, and of the Holy Ghost: 20 Teaching them to observe all things whatsoever I have commanded you: and, lo, I am with you always, even unto the end of the world. Amen.” Jesus had already told his disciples this: Matthew 24:14 “And this gospel of the kingdom shall be preached in all the WORLD for a witness unto ALL nations; and then shall the end come.” Nowhere in scripture have I ever read the command from Jesus saying, “Go into America only and preach the gospel.”

Please think about this and let it sink into your heart and mind. This was the very last thing that Jesus said on earth. HOW IMPORTANT WAS THAT? It is safe to say that Jesus, not only gave them a command and a commission, but He gave them a WORLD VIEW. But this was not just for His disciples only, but for every Christian on earth. I think it would actually shock some Christians to know, there are other Christians in foreign countries, not just America. When did Jesus say the end will come? Read it again in the previous paragraph Matthew 24:14. 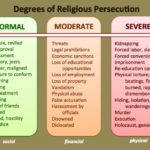 If you know nothing about what is going on in this world,  then you do not have a clue. END TIME PROPHECY AND WORLD EVENTS, IS NOT JUST FOR AMERICA, IT IS FOR AND ABOUT THE WHOLE WORLD. Would it surprise you to learn that the United States makes up only 4.28 percent of the world’s population? You CANNOT have a true world view of ANYTHING (especially Christianity and the Church) IF it is based on 4.28%. Then consider that only 62% of ALL Americans say they are  Christians.

What did Jesus tell us? John 15:18  “If the world hates you, ye know that it hated me before it hated you.
19 If ye were of the world, the world would love his own: but because ye are not of the world, but I have chosen you out of the world, therefore the world hateth you.
20 Remember the word that I said unto you, The servant is not greater than his lord. If they have persecuted me, they will also persecute you; if they have kept my saying, they will keep yours also.
21 But all these things will they do unto you for my name’s sake, because they know not him that sent me.
22 If I had not come and spoken unto them, they had not had sin: but now they have no cloak for their sin.
23 He that hateth me hateth my Father also.
24 If I had not done among them the works which none other man did, they had not had sin: but now have they both seen and hated both me and my Father.
25 But this cometh to pass, that the word might be fulfilled that is written in their law, They hated me without a cause.”

CHRISTIANS ARE THE MOST PERSECUTED PEOPLE IN THIS WORLD

At this time in history, Christians are the most persecuted people in the WORLD.  It has not always been so, but it is now. I really do not foresee it getting any better but only worse. The Jews and the nation of Israel have always been persecuted. The Jews are persecuted worldwide now, more than ever, simply because they are Jews. I have never seen such hatred for the Jews as I see right now. The Pew Research Center says that hostility to religion reached a new high when Christians faced some form of discrimination and persecution in 139 countries, almost three-quarters of the world’s nations. Christians have been crucified, stoned, burned alive, drowned, beheaded, hacked into pieces, blown up, raped and tortured (even children), acid attacks, and various other forms of torture and death. Churches and homes burned to the ground, worldwide.

I will quote from The Independent News of the United Kingdom. “Christians are languishing in jail for blasphemy in Pakistan, and churches are burned and worshippers regularly slaughtered in Nigeria and Egypt, which has recently seen its worst anti-Christian violence in seven centuries. The most violent anti-Christian pogrom of the early 21st century saw as many as 500 Christians hacked to death by machete-wielding Hindu radicals in Orissa, India, with thousands more injured and 50,000 made homeless. In Burma, Chin and Karen Christians are routinely subjected to imprisonment, torture, forced labor, and murder. 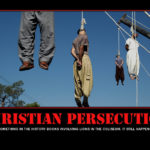 America’s most prominent religious journalist, John L Allen Jnr, has just published “The Global War on Christians.” The former chief rabbi Jonathan Sacks told the House of Lords recently that the suffering of Middle East Christians is “one of the crimes against humanity of our time”. He compared it with Jewish pogroms in Europe and said he was “appalled at the lack of protest it has evoked”. “Persecution is increasing in China; and in North Korea, a quarter of the country’s Christians live in forced labor camps after refusing to join the national cult of the state’s founder, Kim Il-Sung. Somalia, Syria, Iraq, Iran, Afghanistan, Saudi Arabia, Yemen, and the Maldives all feature in the 10 worst places to be a Christian.”

“The reality of being a Christian in most of the world today is very different. It only adds to their tragedy that the West fails to understand that – or to heed the plea of men such as the Catholic Patriarch of Jerusalem Fouad Twal when he asks: “Does anybody hear our cry? How many atrocities must we endure before somebody, somewhere, comes to our aid?” If you want to see and understand the truth then click on this link from  christianitytoday.com

I want to give you 1 final link that is necessary for you to understand the hatred for Christians worldwide. It is “The Top 50 Countries Where It’s Most Dangerous to Follow Jesus.”   https://www.christianitytoday.com/news/2018/january/top-50-christian-persecution-open-doors-world-watch-list.html

You do have to look at Arab law and their false religion,  and ISIS. Their goal is the total destruction of Christianity and Judaism. . Many think Isis is dead and destroyed. No, Isis is alive and well, they continue in other countries. One country is the Philippines. President Rodrigo Duterte just threatened to eat ISIS militants (LITERALLY). “I will eat your liver if you want me to,” he ranted. “Give me salt and vinegar and I will eat it in front of you.”According to the South China Morning Post, on Wednesday night Duterte directed the threat at Abu Sayyaf, an ISIS-affiliated group with a stronghold in the southern island of Mindanao after the group beheaded two Vietnamese sailors. The sailors’ bodies were recovered on the island on Wednesday.” I REALLY LIKE THE GUY.

Should I ask the question of how many terrorist organizations there are across the world? I have searched for it, maybe you should. Many are funded and are very rich. Are you aware of the fact that there are 22 Jihad Terrorists Training Camps Inside the United States? Are you aware of the millions and millions of dollars that are given to Arab organizations from Saudi countries to push Islam in America? Should I ask why Christianity and the Bibles are banned in many countries? Should I ask, why so many people are killed in foreign countries just for becoming a Christian? If you search those questions you will find they have converted and are mostly Arab countries or have been taken over by Arab doctrine and false religion and law.

Are you aware of the Globalist and United Nations agenda’s to bring in a 1 World Government, with a 1 world religion and a 1 world monetary system? AND POPE FRANCIS LEADS THE WAY.

There is no doubt that we are in an Unprecedented time of persecution of Christians worldwide. Christians around the world CRY OUT FOR HELP. But help never comes. I must ask 2 questions. 1. Where is the outcry, condemnation, or assistance of THE UNITED NATIONS AND ALL THEIR AGENCIES WORLDWIDE? You do not hear about it because there is none. I want to mention the new god called “HUMAN RIGHTS.” Where do the Human Rights of millions of persecuted Christians stand? SAUDI ARABIA leads the 47 member states on the United Nations Human Rights Council. Here they are:

My 2nd question has to be this. Where is the outcry, condemnation, and assistance from Pope Francis and

the Vatican? Francis does not even complain when Catholic Priest and Nuns are beheaded on the mission field-THAT IS A FACT. Francis condemns anyone who speaks against HIS pet refugees, Jihadist, Arab, sword-wielding, terrorist organizations. Francis openly admits he is a Globalist and pushes for a one-world government. My friends and readers, this is not going to get any better but is getting worse. I want you to remember this saying: AS IT HAS BEEN, SO SHALL IT BE. And does history repeat itself? I asked in this article for you to open your eyes and look at the truth and reconsider your own World View. I do truly hope that you will continue to read Part 2 through 6 in this series. This is Christian and Biblical World View Part 1 Persecution. THE LORD IS COMING SOON, Part 2 through 6 will lay the foundation of how and when.
Christians will enjoy the video below. Here is what we are fighting for.

Your thoughts, comments, and opinions are welcome here. Leave them in the comments box below.  RAY

What Is The Meaning Of Love

THE DEATH OF AMERICA/THE RISE OF GLOBALISM PART 1