Welcome. I want to say the time and Era I am writing about is my generation. I lived it, I was heavily

influenced by it. This music had a great influence in the sexual Revolution of the 1960’s This is where it all started for me. It was a time of social and cultural change. It was known as the counter-culture or subculture movement. This was the time for me and thousands of others who adopted a concept and philosophy of, All you need is Love. The Music Of This CultureThe 60’s was also the time of The British Invasion, most notably the rock and roll band known as The Beatles from Liverpool England. They led the way in changing rock and roll music as we know it today. The Beatles also were known as The Fab Four, not only impacted music but the very culture we live in including the subculture.

Wikipedia.org says,”The BBC (British Broadcasting Corporation) asked The Beatles to come up with a song that had a message understood by everyone. As their manager, Brian Epstein said, ” It was an inspired song and they really wanted to give the world a message, The nice thing about it is that it cannot be misinterpreted. It is a clear message saying that Love is everything.”

The song was a hit worldwide. It’s called,  “All you need is Love.” John Lennon wrote the song in one day and according to journalist Jade Wright, “Lennon was fascinated by the power of slogans to unite people and was never 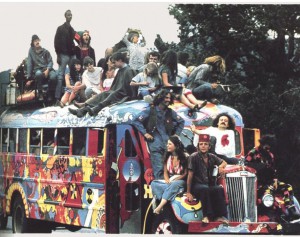 afraid to create art out of propaganda. When asked in 1971 whether songs like “Give Peace a Chance” and “Power to the People” were propaganda songs, he answered: Sure. So was All You Need Is Love. I’m a revolutionary artist. My art is dedicated to change.'”

The Hippie Movement (or hippy) subculture was originally a youth movement that arose in the United States during the mid-1960’s. It spread to other countries around the world. The “hippie” name came from hipster or hip. It was used to describe ” beatniks” who had moved into New York City’s Greenwich Village and San Francisco’s Haight-Ashbury district.

The Beatnicks, also known as the beats, adopted the term hip. Early hippies inherited the language and counter-cultural values of the beat generation. Hippies created their own communities, listened to psychedelic music, embracing the new sexual revolution. They used drugs such as pot, LSD, and mushrooms. They wanted to get high and have a new experience.

The gatherings and festival’s of the Hippie Movement were numerous not only in America, Around the world,  this new counterculture grew and spread. In January 1967, The Human Be-In, in Golden Gate Park in San Francisco made the hippie culture popular. It leads to, the Summer of Love on the West Coast of the America and the 1969 Woodstock Festival on the East Coast. 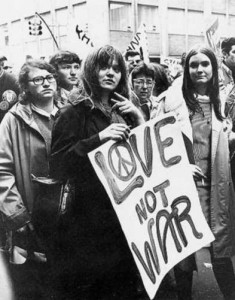 The hippie culture, values, and fashions, influenced popular music, television, movies, literature, and the arts. Since the 1960’s many aspects of hippie culture have been assimilated into mainstream society. The religious and cultural concepts of the hippies were accepted. Eastern philosophy and spiritualism reached a larger audience.

Within the Hippie movement was the Free Love movement. They rejected marriage. It was seen as a form of social and financial bondage. The Free Love Movement’s goals were to separate the state in sexual matters. Like marriage, birth control, and adultery. This movement wanted freedom from Church and State’s rules, regulations, and values. They felt that no one had the right to regulate their personal relationships.

Laws that concerned the free love movement included any that prevented an unmarried couple from living together, those that regulated adultery and divorce, the age of consent, birth control, homosexuality, abortion, and sometimes prostitution, but not all free love advocates agree on these. Another aspect was the battle against obscenity laws.

The Peace Movement-Protest And Revolution

Another song written by John Lennon of the Beatles is, “Give Peace a Chance.” This song became the anthem of the  Peace movement. The Vietnam War was in full swing and in the late 60’s and peaceful protest turned violent. Protesters felt their demands were being ignored by the government. The Anti-War movement was pushing for a total withdraw of all American troops from Vietnam. Anti-war songs were very important to the hippie movement.

The popular slogan of the late 60’s was, ” Make Love Not War”. When Richard Nixon was sworn in as President of the United States, he faced a divided nation. In all honesty, the hippie movement was not alone in protest. The Vietnam War there was a deep division in America and the military draft was cranking out soldiers. At this point in time, John Lennon of the Beatles wrote another protest song called “Revolution.” 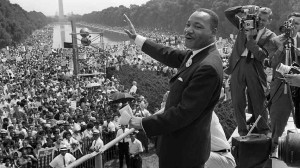 At this same time, there was another very important movement going on. It was The African-American Civil Rights Movement. Their leader Reverend Martin Luther King Jr., opposed the Vietnam War as most blacks did. Black Americans had their own protest song called,  “We Shall Overcome.”  Black Americans understood both love and revolution, they were struggling simply for equality and civil human rights. I lived through the protest and riots. I witnessed whole cities being burned to the ground. There was inequality and it needed to be corrected.

The “Black Power” movement with the “Black Panthers” came about as a revolution and resistance movement. They had their own signs and symbols of protest and destruction. America was split and divided. The counter-culture movement of that day was the early progressive agenda. Hate the government, hate religion and God. Hate America, hate the flag, hate the National Anthem and hate the military and law enforcement.

UPDATE: I wrote this article in early 2015. Today is 10-01-2017. There is an old saying that says, “The more things change, the more they stay the same.” We have gone full circle now with a new generation. We face the same problems now that we faced in the 60’s and early 70’s. The hatred has only intensified and is worse now. It is the very same hatred for everything that America stands for. Here is an example. Feelings in today’s society are more important than any laws or the Constitution. What I want and how I feel is all that matters. And, no one is allowed to have a different opinion than mine or I will physically assault you.

Political Correctness and tolerance are the standard of today and the rights and freedoms afforded to Americas’ citizens by the Constitution are under constant attack. Morals, values, and ethics are subjective and they are what I want them to be. This is the attitude of our society. There are new players in the game of “Destroy America.” This has gone worldwide with the Globalist agenda, the Muslim agenda, and all are backed by the United Nations and The Vatican. We live in a day of destruction and World War III can happen any day.

I hear many say, “Why can’t we all just get along and love each other?” The truth is “Love is not all you need.” Until you develop trust, respect, and responsibility for each other, there will be nothing or no one to love.

I used these incidents to show the progression of what we call love and revolution in a complete era. How it affected our society and came about. Not only was culture changed, but the meaning of love changed. The value of love was redefined and changed.

The real message of this era was about love and freedom. Did this Generation indulge in what we call love? Yes. There is no doubt that rock music with its message of love, greatly influenced this era. Not only by the Beatles but by many other rock and roll musical artists.

I will end with a few quotes of others who lived in this generation.

Alfred Kinsey,”The only unnatural sexual act is that which you cannot perform.”

Abbie Hoffman said, ” “The ’60s are gone, dope will never be as cheap, sex never as free, and the rock and roll never as great.”

Unknown author, “If it feels good, do it!”

Ed Sandards,  said,” When you coordinate and liberate and release the sexuality and the minds of youth, and can twist it and change it toward a different goal and direction, via rock ‘n roll, via sex in the streets, via dope, via action, direct action … then you can maybe push this country and we can rewrite the whole structure, based on the kind of energy released by rock ‘n roll.”

Society had changed and come a very long way since the 60’s but the song “All you need is love” is still very popular today. I only wish the meaning was equally as popular.

Your thoughts, opinions, and comments are welcome, so leave them below.